As I mentioned earlier in the week, the website will become much more of a centerpiece for Terra/Sol Games. The idea is that we will discuss things of interest in this blog to those interested in the Twilight Sector and gaming in general.

An example of that is today’s post. Below you’ll find a revised version of an essay I did on how the technology we envision in the Twilight Sector setting would affect the family. This essay first appeared in ‘Freelance Traveller’ a Traveller e-magazine. Although specifically for the Traveller ruleset, ‘Freelance Traveller’ is a wonderful resource for anyone running a science fiction campaign and I highly recommend it. And as icing on the cake…it’s free!

This series of essays on Life in the 30th Century is meant to provide players, referees and readers a glance into what everyday life in our Twilight Sector Setting would look like. I hope you enjoy reading them as much as I do writing them.

As always please contact us with any questions or comments.

By the 30th century technology and societal evolution have created a whole host of family types. These cover a bewildering array of options almost as numerous as the human population. What all have in common though is that technology has affected them in some way or another.

One of the original functions of the family was to create the next generation of humanity. Coincidentally it is child bearing technology that has impacted the 30th Century Family the most. The invention of the exo-womb ranks above even birth control as the single most significant technological innovation in human reproduction. With the creation of the first external wombs in 2487 human population saw a significant spike. With women now freed from the arduous tasks of pregnancy and childbirth combined with the burgeoning technology of genetic manipulation human population soared and sociologists cite it as one factor in the subsequent waves of human exploration that have occurred.

When the exo-womb was first conceived one of its key advantages was believed to be an increase in female economic productivity since they’d be relieved of the physical burdens of the creation of children. However the technologies development overlapped with that of Artificial Intelligence which made the need for increased human productivity moot as AI productivity quickly outpaced any possible human productivity gains.

In fact the development of Artificial Intelligence was another technology that greatly affected families. Another key function of the family is to provide economic support for its members. With the leaps in productivity provided by technologies like Artificial Intelligence the need for families to provide economic support has been diminished. Especially for those on the dole, economic factors are no longer a prime motivator bringing people together in family groups either to provide economic support for children or even the adult family members. For those who cannot or will not provide for themselves the state has steped in and provides them with a generous level of economic support. Of course those who are members of economically successful family units do have access to far more economic resources than those who rely solely on the state. Studies have shown that children from economically successful families are far more likely to themselves have successful careers and are more likely to rise to decision making positions in the public or private sectors.

Other technologies have greatly affected 30th century families. Genetic manipulation or gene-fixing has revolutionized humanity some say ushering in an age of Transhumanism. A child born in 2991 has significant advantages over one born in 1991. This genetic optimization is aimed at eliminating birth defects, potential mental instability and enhancing physical appearance. Within certain socially accepted parameters these genetic alterations and ‘tidying up’ are not considered mutations at all, only acts of responsible parenting.

On the other hand genetic blueprints that create Scientifically Induced Mutations (SIMs) are considered mutations in polite galactic society. Despite that fact many families choose to create their children utilizing one or more genetic blueprints. Families elect to do this for a number of reasons from environmental adaptation to providing a perceived genetic advantage to their progeny.

Education is another area where technology has affected the family. A subsequent “Slice of Life” article will examine in detail 30th century education. It is sufficient in this article to note that technologies like EdSoft programs exist. These are education software packages which make use of Agent or Intellect programs to create adaptive and customizable teaching tools. These can then be combined with an instructor which can take the form of anything from a robot or BioCon to a stuffed bunny, these programs can take a child from infancy to an advanced degree.

One of the primary consequences of this technology is that it has made obsolete the traditional school setting except as an education and/or socialization choice. Needless to say this has been welcomed as a brilliant breakthrough in some Stellar Nations like the Orion Confederation and the UUP and as a threat to social stability in others like the APR.

In the realm of the law of unintended consequences technologies effect on life spans greatly affects the 30th Century family. Not all of these effects are necessarily negative. For example longer life spans means there are often more family members and more family generations in each family group. Since family members often support each other this has had a positive effect both economically and also socially. Surveys have shown that Families with more generations mutually cohabitating are generally happier and more socially responsible.

One effect that might be considered negative is with longer life spans opportunities for advancement in the workplace are fewer as centennials hold onto their positions leaving fewer high level jobs available for younger people. This often affects families who are in their prime reproduction years. One result of this is that potential parents are putting off reproduction till later in life. This will undoubtedly spawn its own set of consequences in the centuries ahead.

Increased longevity has also played havoc on family trees; combined with exo-wombs you can now be younger than your brother or sister’s great grandchildren. In instances like this traditional family titles like niece or nephew (or great niece or nephew) don’t really tell the short hand story of familial relationships anymore.

Further clouding the whole family thing are cases of interspecies marriage and we should probably throw marriage to Artificial Intelligences into that whole cloudy mix as well. Exo-wombs make children possible in these types of pairings. You will be forced to choose a species most likely at least if you want to keep things legal. Science has been working on genetic blending so close biological relatives like homo sapiens, chimpanzees and gorillas can reproduce a blended offspring but there are legal impediments to this type of reproduction in most jurisdictions. In physical appearance a child of such a union will strongly favor one species but will have biological contributions from both or…all parents. Yes science has made it possible to have more than two biological parents. No such physical impediments exist for Artificial Intelligences however. They can purchase a “fully functional” BioCon of any species they desire if they wish to mate with another sentient. If they were to choose another Artificial Intelligence and opted to create a biological offspring instead of merely programming one (biological would definitely be cheaper than creating an A.I. offspring). A situation where a biological entity had a digital entity as a sibling could exist. 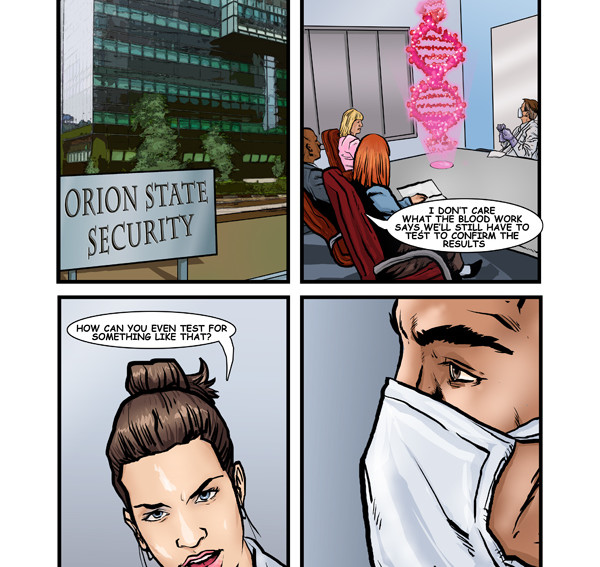