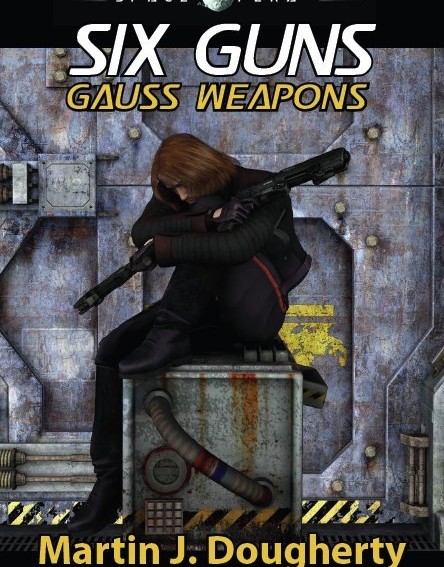 All gamers can attest to the difference between having a stock weapon right out of the core rules and something personalized with history and flavor all it’s own. Six Guns Lasers by Martin J. Dougherty brings that depth to your table. Featuring beauties like the Rourke Weapon Systems “Light Cobra” is only the beginning. It also brings you new rules for lasers to help take your Traveller game that extra parsec!

One of our Kickstarter backers put it beautifully: Why play “Marine hides, armed with a laser and blade” when you can play “Corporal Devlin ‘Fitz’ Fitzsimmons crouches behind the shattered blastdoors, as moonlight gleams on his Litebeam Reliant with a K187 Bayonet fixed to the barrel”? Which evokes the visceral sensation that infuses the game with lasting memories? Six Guns Lasers is a worthy addition to the Traveller setting; it’s the difference between “large battle station” and “the Death Star”! Drew Metzger

In addition to the custom weapons and accessories, Six Guns Lasers includes two different systems of damage allocation as well as rules for armor and antilaser materials. Once you’re armed and loaded for bear, we have even included an introductory adventure using all the new goodies: “Gunrunner”! Experience the rush of adrenaline, grab a copy of Six Guns Lasers for your armory today!

To celebrate the release of Six Guns Lasers, and our first anniversary as a game company, we are putting the earlier Six Gun books on sale at a deep discount until May 31st:

Terra/Sol Games has been bringing you quality supplements for the Traveller RPG by Mongoose Press for six years, this year! Come see what all the buzz is about!